It took us a juddering forty five minutes' drive from the main road south, bouncing across the ruts of a hard earth road, to reach Kokolo Full Primary School. ['Full' because it provides classes at each of the eight standards which comprise a full primary education in Malawi.] I staggered slightly as I jumped down from the four-by-four. The sun had shone hot through the car windows but out here in the bush the wind cut through my thin cotton shirt. I quickly pulled on my jacket. Winter in Malawi can come as a bit of a shock sometimes. The Edinburgh I had left just a day and a half earlier had felt positively balmy by comparison. 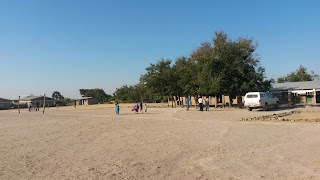 My initial view of the school was just what I expected: a short line of low buildings at the end of a wide sandy compound, teachers' houses in the distance. Not a single blade of grass survived, even though the rainy season had petered out only a couple of months or so ago, at the end of March.

The official school day had finished a couple of hours earlier, so by the time we arrived at about three o'clock only a handful of curious locals stood around to observe our activities. I had no official role but was just tagging along with my colleagues, at the last minute taking advantage of a routine monitoring visit by the district's primary education adviser to learn a bit about Link's Family Literacy Project (FLP).

Routine the visit might have been, but the school clearly regarded it as important nevertheless. A banner announced the purpose of our visit, strung across the front of the solid structure ahead. Well, at least it wasn't as dilapidated as such buildings often are. The school had sturdy brick walls and a new corrugated iron roof, though how it managed to house over a thousand pupils I do not know. 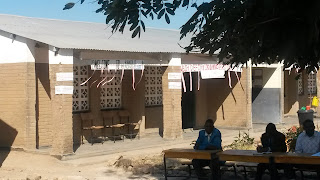 The answer, perhaps, lay in the sight which greeted our eyes. There under the mango trees were ranks of desks, dragged out of the senior classrooms. Whether the extra-curricular literacy classes normally took place outside, I do not know, but chances are that at least some of the timetabled classes did. 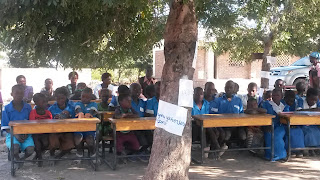 What we were about to observe was a Reading Club, a voluntary activity held after school hours. The parents' committee had come along and stood with the staff to show their support. 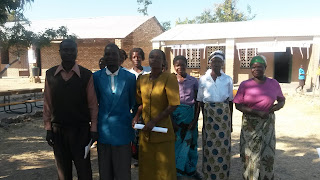 Link's role has been to support the training of two local volunteers and to provide the modest resources required to develop the learning materials. These two young men, educated to secondary school certificate level, work with the children after school hours. They use rather more active teaching approaches than those the children normally experience in the classroom. Hardly surprising, given the fact that early years teachers are potentially responsible for the education of two or three hundred children at any one time.

The activities we observed followed a systematic structure. First the children learned about letters, selecting and matching to upper- and lower-case displays. 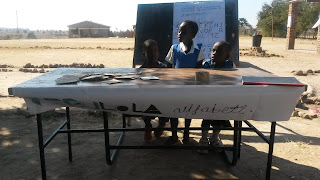 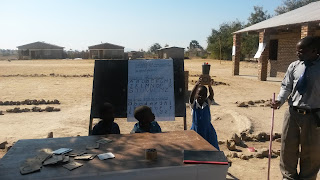 They move on to sounds, one by one, then combined and eventually making their own words. 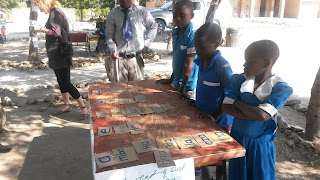 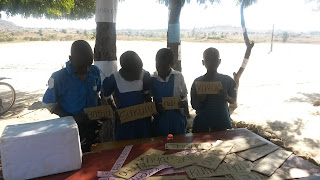 Then they start combining words and making their own sentences.

In due course, they're ready to watch a 'television programme'. Kokola's own take on the media requires an old box, four twigs and strips of A4 paper stuck together. 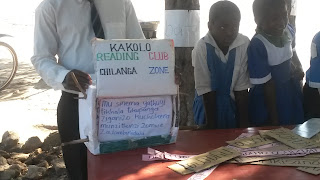 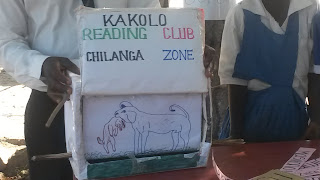 Students act as narrators, taking turns to read out the captions to the illustrations of the stories. 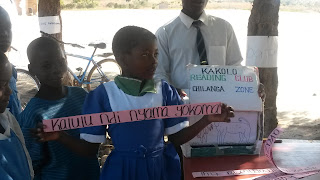 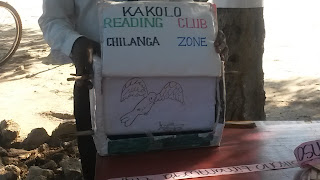 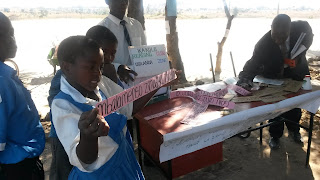 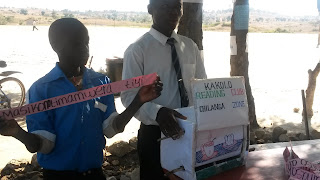 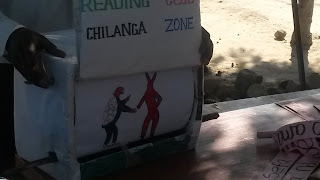 The old tale of the hare and the tortoise caused much amusement.

However, reading skills need to be exercised on real texts, difficult if your school has no books. So, the teachers have written their own.

Meanwhile, those still at an earlier stage have moved on to the chanting, marching and dancing which help them to retain their learning. 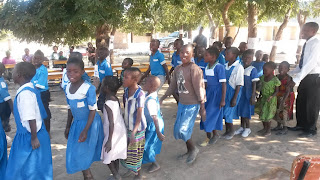 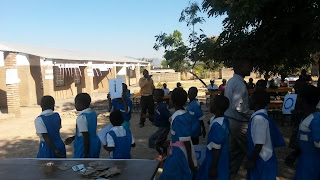 Of course, much of what I have described is fairly standard in most ordinary Scottish schools. However, for these rural children in Malawi, such activities are giving them a chance to become literate, indeed a second chance for both them and their families. Sadly, they DO go to school, or at least register and attend early years classes. Indeed, no doubt like most of their peers in Malawi they are attentive and keen to learn. 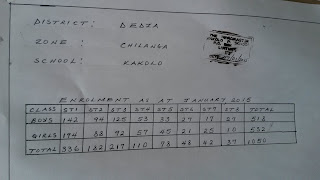 However, learning simply does not happen in many cases and the children steadily drop out of school. Look at the chart on the right. Each of these classes has one teacher. That means 336 children in Standard 1, with a gradual drop out until Standard 8. Here the 37 children remaining will be those most likely to pass their Primary School Leaving Certificate Examination. The PSLCE provides a precious opportunity for a very small number of those still retained within the system and successful in their exam to be selected to go to secondary school.

Most students, however, leave long before Standard 8.  Many depart reluctantly because of family pressures. The school draws from more than 40 individual villages, and for some the travelling back and forth becomes simply too much. Towards the end of their primary schooling, some of the girls may get married, not necessarily by 'choice', of course. Their bride price brings precious money into the household. The district works with other NGOs (non-governmental organisations) to combat child marriage.

However, many primary pupils are so confused and demotivated by the nature of their classroom experiences that they may be keen to leave. Many parents see little point in their continuing,  if they are making little progress. Their lack of progress may be despite their teachers doing the best they can in the circumstances to provide a positive learning environment.

In Kokolo, I was shown an example of 'excellent' practice in providing a stimulating learning environment for Standard 1. The teacher had made his own visual displays. His child-sized desk is in the corner while the children sit on the floor.

Next door, in Standard II, the teacher had assembled a little shop.

Elsewhere there was further evidence of teachers doing their best to provide support for literacy and numeracy.

The headteacher's office displayed evidence of the structures, systems and plans that you would expect in a well-managed school.

Expectations of teachers were clear. The school improvement plan addressed the required areas. However, the children were not learning. Or, put more fairly, too few of them were becoming literate and too many of them were dropping out.

So, what is the 'message' of this post? How do you learn to read in a class of 300, with one teacher and minimal resources?

Well, on the surface of it, it looks as if you need an after-school activity organised in small groups, supported by an NGO and managed by volunteers. Not all children will be able to attend such sessions, of course, for there is still water to be fetched, animals to be herded, siblings to be watched, eggs to be collected, goats to be milked, washing to be done, produce to be taken to market, porridge to be stirred, maize to be harvested, firewood to be carried and, if you are lucky to have one, pit-latrines to be cleaned. However, more may attend than currently survive education to the end of Standard II.

Describing projects such as FLP in these terms, however, makes them seem like unsustainable add-ons to the dispiriting grind of the school day. Such projects really act as shop windows for practical approaches to teaching and learning which even demotivated and demoralised teachers may be able to take on board to some degree. Indeed, in Kokolo the teachers and volunteers worked together on developing the literacy activities.

Projects like FLP demonstrate the possibilities for small-scale success whether within class time or after school hours, based on a few key factors. None of these factors are world shattering. Indeed, they are taken for granted in the education systems of prosperous countries like our own.


Oh, and one other thing which is purely a personal view. I would ask why Standard 1 received the same teacher allocation as Standard 8. The key measure for success in Malawi, it seems to me, is not necessarily the pass rate in PSLCE, important though this is for the life chances of the few. The key measure is retention of the many within the education system itself. More creative and flexible approaches are needed to organising teaching and learning within the school using the resources available.

If children continue learning for longer, recognising and appreciating their own success at each stage, then they are more likely to become literate and numerate. Their own children will live longer. They themselves will be less likely to marry early, die in childbirth or suffer from the consequences of badly administered pesticides or outdated farming practices. They will be more able to feed their families. They will understand more clearly the financial and long-term consequences of the decisions they may have to make.

The big issue, though, is where to start. Perhaps, just as in Kokolo, it is the starting itself which matters.

Posted by Elisabeth Ritchie at 12:04 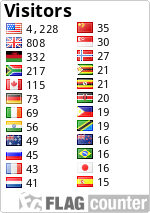